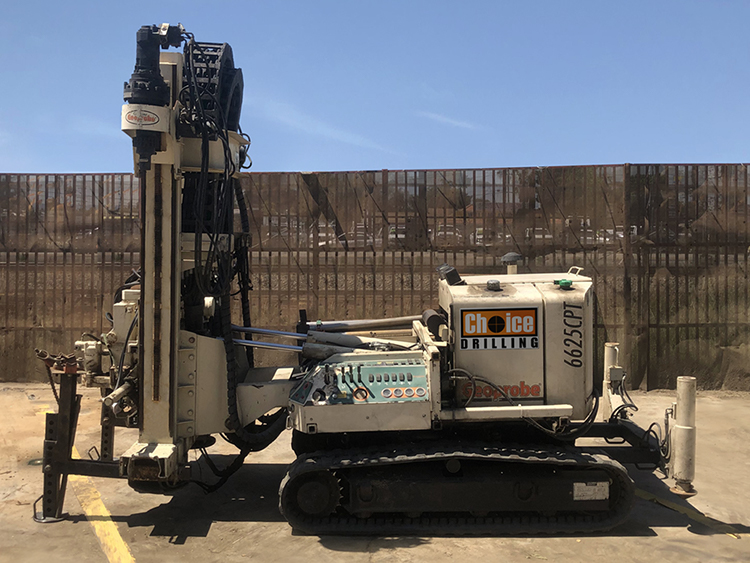 What is Direct Push Technology (DPT):

A direct push machine “pushes” tools and sensors into the ground without the use of drilling to remove soil to make a path for the tool. Direct push machines rely on a relatively small amount of static weight combined with percussion as the energy for advancing a tool. Direct push tools do not remove cuttings from the probe hole but depend on compression of soil or rearrangement of soil particles to permit advancement for the tool string. Direct push tools are advanced as far as possible using only the static weight of the carrier vehicle. Percussion is applied as required when probing through sands, gravels, hard pans, high friction clays, tills and fill materials.

For many years, geotechnical and environmental investigations have employed conventional drilling using a hollow stem or solid stem auger to collect a sample. The technology has wide spread acceptance, but has several shortcomings that may now be overcome using direct push technologies.

Direct Push drilling technology (DPT) can be a cost effective, time saving, technically accurate means of drilling and sample collecting. This drilling method has been used for over 16 years.

Initially, direct push was primarily practical and effective in shallow (less than 20’ below ground surface (BGS), sandy or soft clay soils, but recent technological developments have expanded the range of soil types to include silt and gravel as well as increasing the depth range up to 100’, potentially. Such developments also have provided investigators with a variety of soil investigation options to choose from, as direct push systems work in conjunction with a number of sampling tools, and chemical and lithological indicator instruments. they also have become the primary method of installation of pre-packed monitoring wells.

The versatility of direct push does not end with the range of tooling, as some units are mounted on trucks, tracks and portable platforms. This variety of platforms offers the investigator the ability to sample areas previously considered inaccessible, including the inside of buildings. Although the truck mounted and portable geoprobe units may have a limited capacity, possibly 20’-40’ (with 1″ well installs), our track mount rig has the ability to perform well in unconsolidated soils to greater depths, with installation of 2″ monitoring wells.
Conventional drilling can often create an expensive disposal problem. Waste cuttings often have to be placed into drums or bags and sampled for analysis prior to disposal. Costs associated with handling and disposing of drill cuttings can consume large amounts of the soil investigators budget. Direct Push generates little if any extra cuttings. In fact, an EPA study in 1998 found a cost savings of 25-50% may be achieved with many direct push sampling methods. Unlike methods that use rotary auguring to advance tools or install wells, thus generating a large volume of potentially contaminated drill cuttings, direct push methods use a hydraulically powered percussion hammer and the static weight of the vehicle on which the system is mounted. Tools are pushed or punched into the ground by displacing soil to make a path for the tool, thereby eliminating the generation of excessive drill cuttings. Decontamination time may be cut by up to 75%, as the casing is so small that it can be decontaminated in 5 gallon buckets.